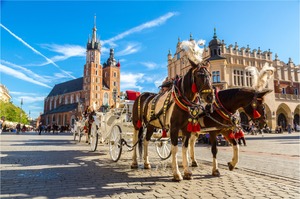 Krakow is often picked by tourists as one of the cheap city break deals, a top choice for stag parties and hen do’s. Apart from its affordability and a myriad of options for an enjoyable pub crawl and eating out, this versatile city has a lot to offer. Here are our reasons why Krakow should be on your destination list this year.

You can see 3 UNESCO World Heritage Sites during one trip

The Historic center of Krakow was selected by UNESCO as a unique landmark back in 1978, and it was among the world’s 12 treasures that were enlisted by the United Nations for the first time in history.

Krakow’s old town has preserved its layout since the 13th century. Because the city escaped almost unscathed the horrors of World War II, it has managed to conserve its splendid medieval architecture with an array of houses that nuzzle up against each other, remnants of the medieval fortification walls, magnificent churches and the largest market square in Europe.

St. Mary's Altar made in the 15th century by Veit Stoss is the centrepiece of St. Mary's Basilica

Wieliczka salt mine is yet another place that appeared on the first list of UN's world's outstanding places in 1978. This unique underground museum emerged on the premises of Europe’s oldest salt mine, which dates back the 13th century. Along the kilometers of underground salty corridors, you can see sculptures, works of art and even chapels carved in salt. You can visit world’s deepest church and restaurant during our Krakow salt mine tour.

Auschwitz-Birkenau is a UNESCO-listed Cultural Site with a horrendous history. This German Nazi concentration camp that existed from 1940 to 1945 has become a symbol of human cruelty. Over a million of people were systematically exterminated here. The fortified walls, piles of victims’ personal items, gas chambers, barracks and barbed wire remind us of the horrors of the Holocaust and teach a lesson that such acts of cruelty should never repeat again.

Krakow is Poland’s cultural capital and Europe’s important business center with a 19th-century feel. You won’t find a skyline here, and the thud of hooves still echoes on the cobbled streets of Krakow’s old town.

Within walking distance of the centre, one can find Kazimierz – a Jewish neighbourhood that for 5 centuries remained a Jewish autonomous enclave. These days Kazimierz is the center of artistic- and nightlife, and only scarred dilapidated buildings remind of the horrors that their inhabitants faced less than a century ago.

Apart from the medieval, Baroque, Gothic and Renaissance architecture, you can find remnants of the Soviet past in Krakow. You can go on a Krakow communist tour to Nova Huta – the city’s industrial neighbourhood built by the Russians, and see its unpretentious blocks and steaming steelworks.

Krakow and its surroundings provide wonderful opportunities for slowing down your pace and enjoying the moment.

The city boasts Zakrzowek - an amazing manmade reservoir with turquoise waters and magnificent cliffs around it. Poland’s most famous scuba-diving school is located here. At the bottom of the quarry, you can find a submerged bus, a fiat car, a changing room and many other unexpected things.

Just a couple of hours away from Krakow you can go hiking in Zakopane – Poland’s capital of winter sports nestled in the valley of the Tatra mountains. Zakopane is known for its unique local traditions and dialect, hospitality and unsurpassed scenery.

Whether you go on a traditional Polish food tour, set off on a culture trip with an Auschwitz tour from Krakow or conquer Zakopane’s mountain peaks, Krakow will enchant you.

Don't miss out on our best deals and great discounts - stay tuned to get them first!